Down with hospitals! You spend ages and ages waiting to be seen, it's impossible to find a parking space, you're there for unpleasant reasons and you have to use those special hand lotion dispensers every twenty minutes to keep your hands germ-free. Recently I had occasion to take my elder daughter into UCHG (University College Hospital Galway), or The Regional as I think the natives call it - you'd think I'd know by now, after 24 years in Galway, going to university next to it for eight years and giving birth to three children in it. But there you go. Life passes, and these days I'm there for reasons less pleasant than welcoming a teeny little human into the world.

I heard Leo Varadkar, the health minister, say today that they are hoping to reduce time spent on a trolley in a hospital corridor to 9 hours. A month ago, my daughter spent 48 hours on a trolley in a corridor. By corridor I mean a narrow passage in Accident and Emergency, along which the public came and went all day and all night, and along which everyone from babes in arms to old men were trundled in terrifying states of repair (poor things). We were cheek by jowl with pneumonia, gangrene, a chainsaw accident and other such time-to-panic situations. My fifteen-year-old daughter wasn't as badly off as some of them, but she was in terrible pain. I found out after two days that if my husband or I had left her alone, the hospital would have been obliged to find her a nice private spot, but they omitted to tell us that until after they'd found her a room.  Eventually, they found her a bed in Paediatrics, even though she is technically too old for it. This was a blessing in disguise, for although it meant her doctors didn't visit her as often as they would have otherwise (Paeds is a long hike from the general ward), she was in a nice environment full of children and the staff were all very kind. We spent the next week with her there. There is nothing like driving your child home from hospital when you've been told by your consultant that you can leave. I did it once before when my son was five, and that Easter Sunday was the most beautiful, the sunniest, I have ever experienced.

She's much better now, thank the stars, but we had to attend a follow-up appointment the other day. We arrived at 2.20 and were seen at 5.00pm. The waiting room was full when we arrived but we were second last to be seen. My daughter's patience - not great at the best of times - was sorely tested and, as a direct result, so was mine. She badgered me and complained the entire time and so in the end I pulled out my sketchbook. From the minute I started to draw, I forgot about my surroundings, the cross voice in my ear (there wasn't much I could do to hurry the staff up) and lost myself in peace. 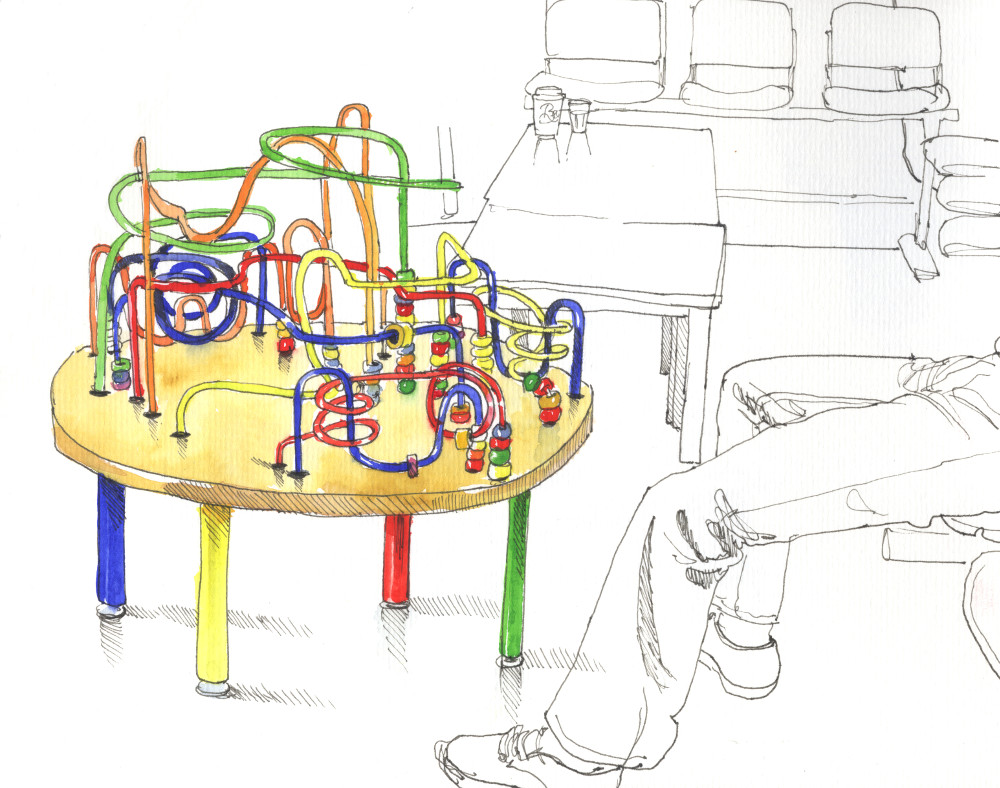 (Almost) empty waiting room in the Regional, Galway
Posted by Róisín Curé at 11:12 No comments: