"It's like an asylum drawing," said my husband in response to yet another sketch I stuck under his nose.
I didn't know how to answer that.
"Asylum? As in, someone looking for asylum?" I said.
"No, it looks frantic, as if it were done by someone in an asylum."
Right.

We visited my husband Marcel's family in Britain over the Christmas period, and took two flights in the space of five days. It's the middle of the stormy season, which meant turbulence, bumps and in my case lurching stomachs. Neither my husband nor our three kids suffer from in-flight nerves, but - ever since I became a mother - I do. My husband tries in his way to allay my fears.

Marcel: Think of it like this - this is the tenth flight the crew have made today.
Me: Then why is that stewardess running? There's clearly an emergency.
Marcel: Think of it like a ship.
Me: Oh, so it's like it's floating on air, just another fluid, and is as stable as that!
Marcel: No, not at all.
Me: You could have pretended.
Marcel: The craft is made to withstand forces many times greater than this bit of turbulence.

Some things he said helped, others didn't. Worst were the kids saying things like "look how far the ground is" or "we'd definitely die if the plane crashed now".

But since I've been in the habit of bringing my sketching stuff on board the flights I take, it's all been immeasurably better. The only drawback is that I often forget one of the tiny bottles of water stuffed in some hard-to-reach corner of my sketch bag, and when the security people find it they make me wait while thet eventually get round to my bag for a thorough, frosty-but-polite search. This isn't too much a problem because while my husband may be calm once he's on the airplane, he is so stressed about getting there with hours to spare that there's always lots of time for security to mess around in my sketch bag.

So here are a couple of the sketches I made last week on my journey to Gatwick and back again, starting with a sketch made in the Departures Lounge of Dublin Airport: 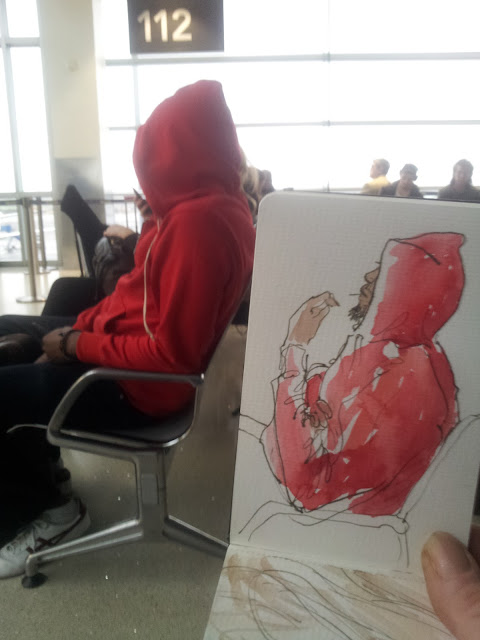 I was inspired by the incredible oeuvre ("work" doesn't do it justice) of Donald Owen Colley, who makes the most beautiful and accurate sketches of travellers that I have ever seen. I took a sneaky photo of my subject, I figured he wouldn't mind too much since you can't really see him.

Once on board I got down to more sketching: 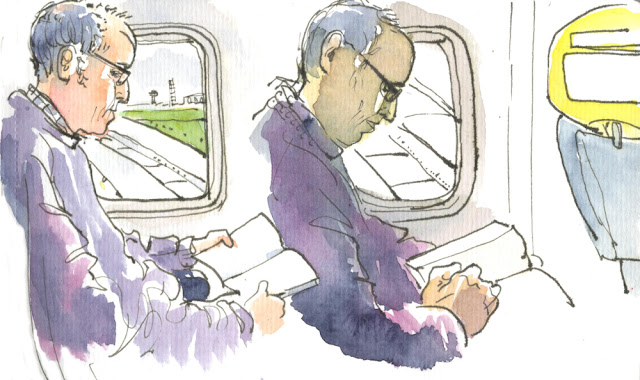 For this one I had the idea, inspired by a gorgeous sketch by Lapin which I saw on this blog a few weeks ago, of drawing the window at different stages in the flight. There were two reasons why this didn't have quite the effect that Lapin's did. Firstly, I never get to sit beside the window. ("You're too terrified to look out the window, so you don't appreciate it," says my husband, not unreasonably.) I could have insisted, but the sky was just a featureless grey from the moment we left the ground, and not the pretty blue we're often treated to.
The sketch of Marcel on the right didn't work very well - I was trying to show how the face is thrown into near-silhouette by the bright light outside. I chose the wrong mix of colours. 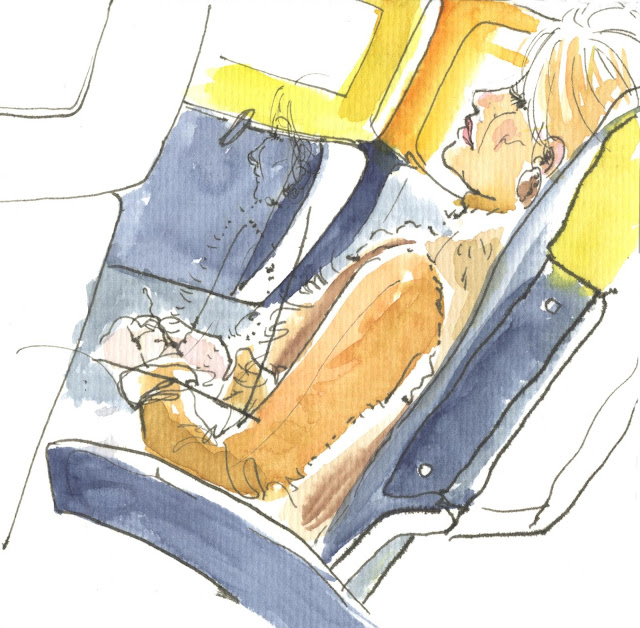 Then I painted this beautiful woman. She was the sort of woman I envy - really slender, with lovely bone structure, and while her hair was the same colour as mine, it had a gloss and thickness that didn't seem right on a lady who was clearly quite my senior - not a hint of frizz in sight. Her make-up was immaculate and her hands, which she admired constantly, were elegant and heavily bejewelled and her nails were, of course, perfect. Her clothes were coordinated to match her hair and skin tone. You can see the ghost of an initial sketch which I abandoned in the seat ahead of her.

(The seats weren't the usual chunky Ryanair seats. I know them intimately - I have painted them many times. "Look at these cheap, thin seats," I said to my husband. "What else have they cut corners on?" "I think they're great," he said. "More leg room for me.") 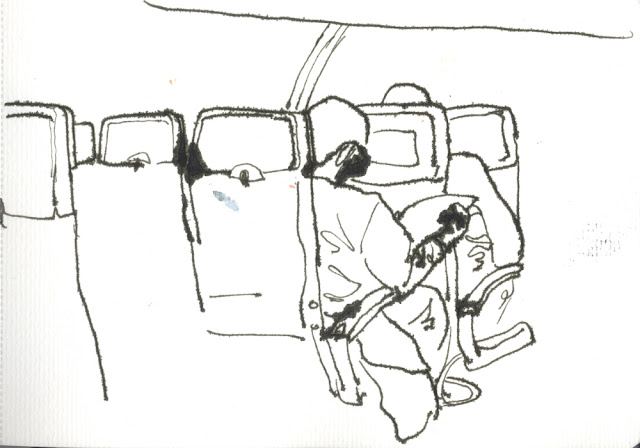 On the return flight things got really bumpy. I made the above sketch just after the upsettingly loud noise of take-off and before we levelled out, when turbulence was shredding my nerves. Now that's a frantic sketch. The pen was blotting like mad too with the changing pressure. After this sketch I moved one seat forward as the plane was half-empty - most people have better things to do on New Year's Day than cross the Irish Sea on a dark and stormy night. 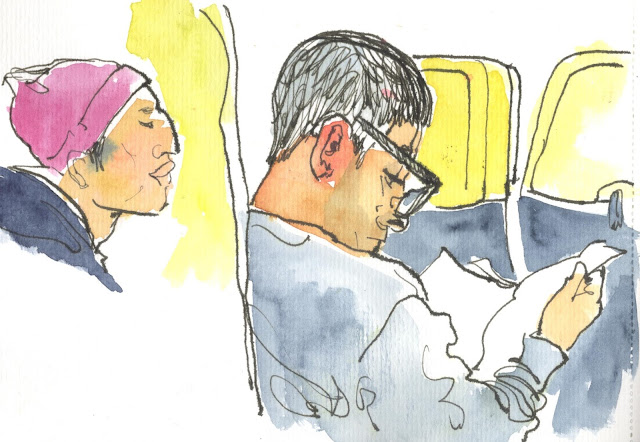 The Japanese lad on the left was one half of a loving couple. They were both beautiful, but he was particularly striking. I have done nothing to convey this beauty so I will tell you that he had magnificent cheekbones, an aquiline nose of exquisite proportions, a full, soft mouth and beautiful hooded eyes. Someone commented on Facebook that she was sure she had spotted the same young man and his girlfriend on a flight from Dublin to Heathrow last October. This would make sense - we were making the return journey from Gatwick to Dublin just a few months later. We compared notes, and we both noticed the beautiful hands and the attentiveness they showed each other (I commented to my husband that he put chapstick on her lips at one point).

I wasn't very satisfied with this sketch (surprise) so I turned to my husband to sketch him instead.
"You're not allowed to draw me," he said, with an air of resignation. We've been through this a million times.
"I'm drawing the window, you just happen to be blocking it," I said. He gave up and had a snooze. 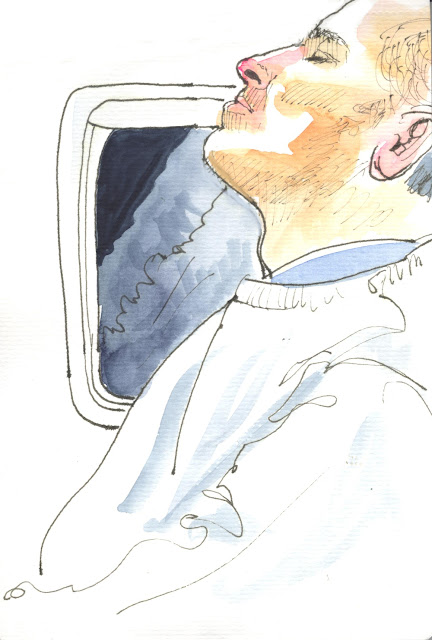 I wanted to convey the subtle reflection in the glass. I didn't really achieve what I was looking to achieve but for once my husband wasn't offended by how I'd portrayed him. This bodes well for future sketching.


Here's the reader in the row ahead of me again: 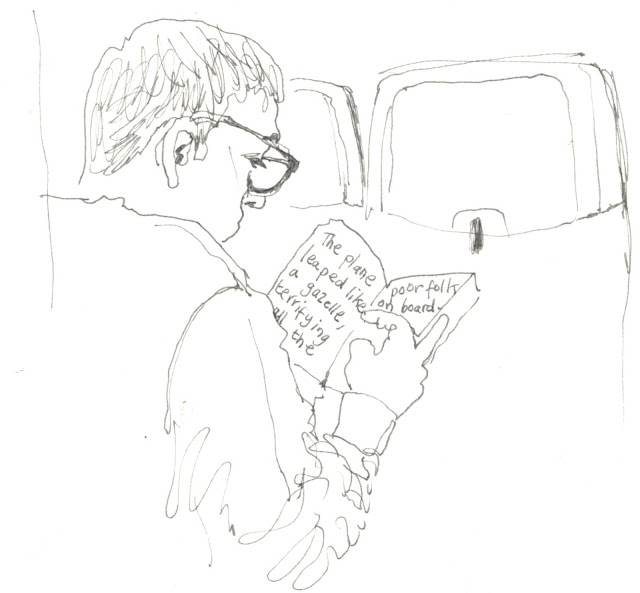 This was on the descent and it was so bumpy that the pilot announced we weren't allowed to land because it was too windy in Dublin. I was sure that no sketch would take my mind off the leaping around - not this time - but it did. In fact I was so relaxed that I figured I'd try to be funny, putting my own words on the reader's book.

I don't know why sketching on a plane works so much better than reading when it comes to keeping calm on board. I wonder whether it's something to do with the fact that reading is somewhat passive, whereas you just can't sketch passively - you have to fully engage your mind, which leaves little room for dwelling on fears.

Asylum sketches? Far from it - urban sketches have kept me from the asylum since I discovered the practice in 2012 (not that I was in one before that, but there were many times that it came too close for comfort). I'm confident urban sketching will continue to keep the wolves from the door as long as pens, paper and paint exist.
Posted by Róisín Curé at 06:29 No comments: