Being Merrie in England: summer in Tenterden, Kent

I had the great fortune to spend a few days in Southeast England a couple of weeks ago. This is an illustrated account of my break and I hope it gives a flavour of a corner of England in the summer.

My extended family live in near Tenterden in Kent, so I've got to know it quite well. It is a very pretty town, full of red brick and cream-painted buildings in classical architecture from the Tudor period onwards, although I won't say more as I'm not an architect and I don't really know my periods. But I do know it is a town with an older-than-average age profile, an assumption I have made by looking around. You have to be careful not to be mown down by very frail flat-capped gentlemen in motorised scooters travelling quite speedily along the pavement. The first time we visited, my husband and I were enjoying an evening stroll on the outskirts of the village, making jokes about the demographic, having survived just such an encounter, and were finding ourselves hilarious. Then we passed two young ladies sharing a passionate embrace - that shut us up.

This time, my husband and I stayed in a sweet little bed and breakfast in the centre of Tenterden called Little Dane Court. Rod, the owner, is a lover of all things Japanese, and his guesthouse reflects that. The garden has an elegant Japanese garden and is generally a delight. I was inspired to sketch the bathroom of our bedroom, which is accessed via a few steep steps from the bedroom. Through the little doorway into the dressing room, two blue kimonos are ready for you, should you need one.

I started drawing the same scene in pen, as I am addicted to strong, indelible lines - but the latter came back to bite me, as I made so many mistakes with the sink that it was a total mess. Wrong lines can make a drawing lively - to a point. Too many, and you can kill it stone dead. So I turned to pencil, which always seems a bit feeble to me, but I enjoyed it all the same. 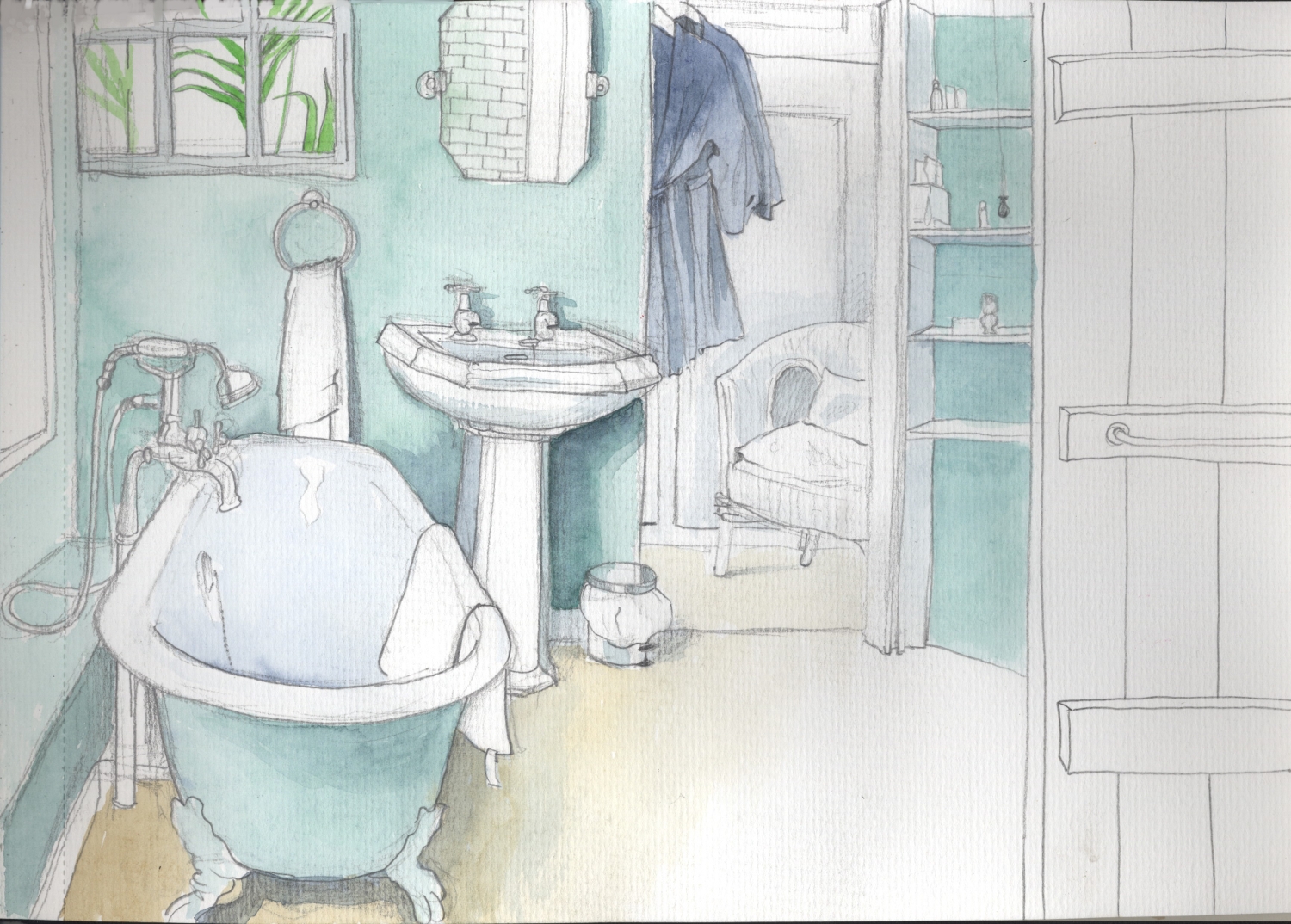 We were in England to celebrate my sister-in-law's birthday. The first night of our stay kicked off nicely. My sister-in-law's lovely house dates back to the eighteenth century and was extended upstairs using the oak beams from a dismantled ship following the Napoleonic Wars.

Here's her house: the windows look like they've been smashed, but that's just my attempt at dappled sunlight. This was done two summers ago when I was a brand-new sketcher, and I'd approach it very differently now. 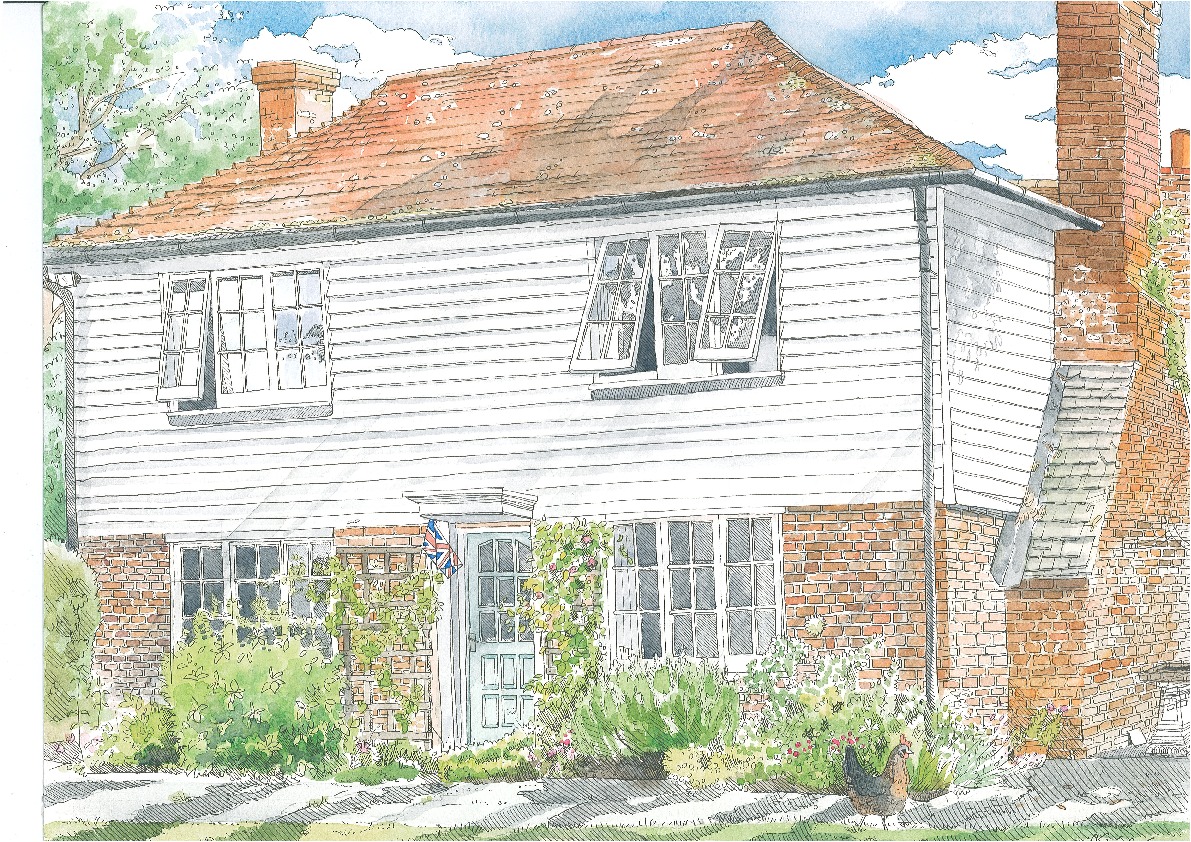 I immortalised Bluebell the chicken strutting in front of the house, which is just as well as the fox got her later that day.

The weird thing about Tenterden is that although it's many miles from the sea now, it used to be right on the coast. Then a massive storm altered the entire south coast about five hundred years ago, and you can still find smuggler's dens and stuff in the town today.

The floors in my sister-in-law's house are all uneven and you take your life in your hands walking across the room, especially after a convivial night in our hosts' company. In fact lots of old buildings in Tenterden are like that, having settled unevenly over the centuries.

I did this sketch of my husband, my brother-in-law and my sister-in-law enjoying a glass or two after dinner on our first evening. No one looks particularly like themselves, but so what? It will always remind me of a pleasant night with the family. 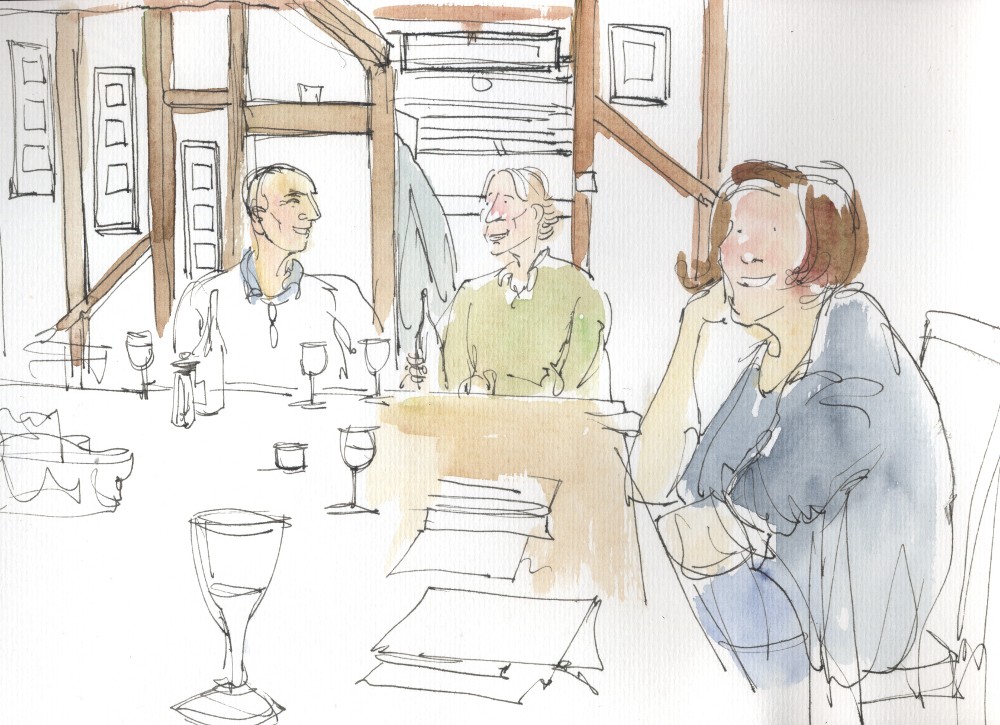 Two days later, I drew the party as it was in progress.

Here's the same party close-up, in case you can't see the detail: 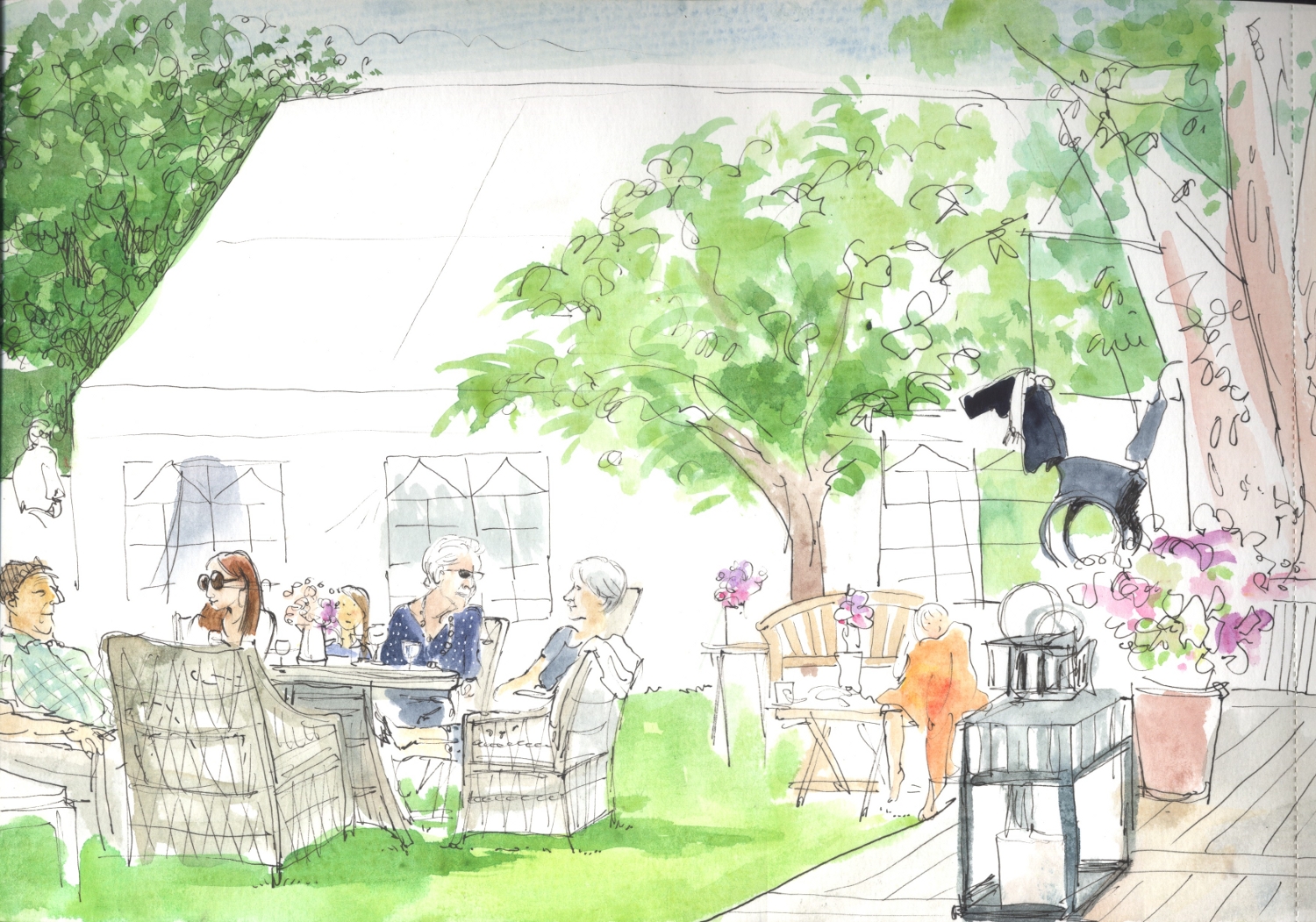 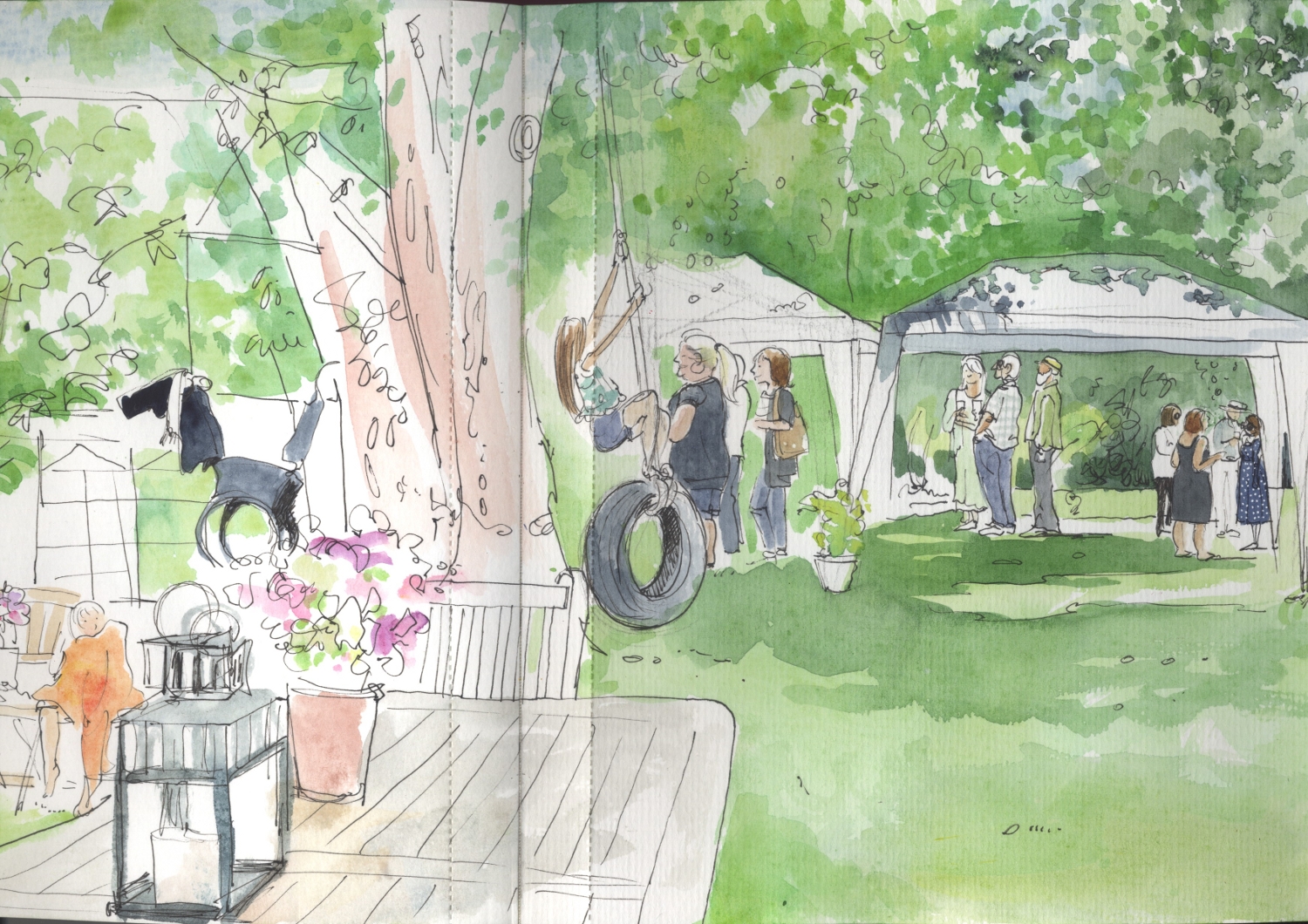 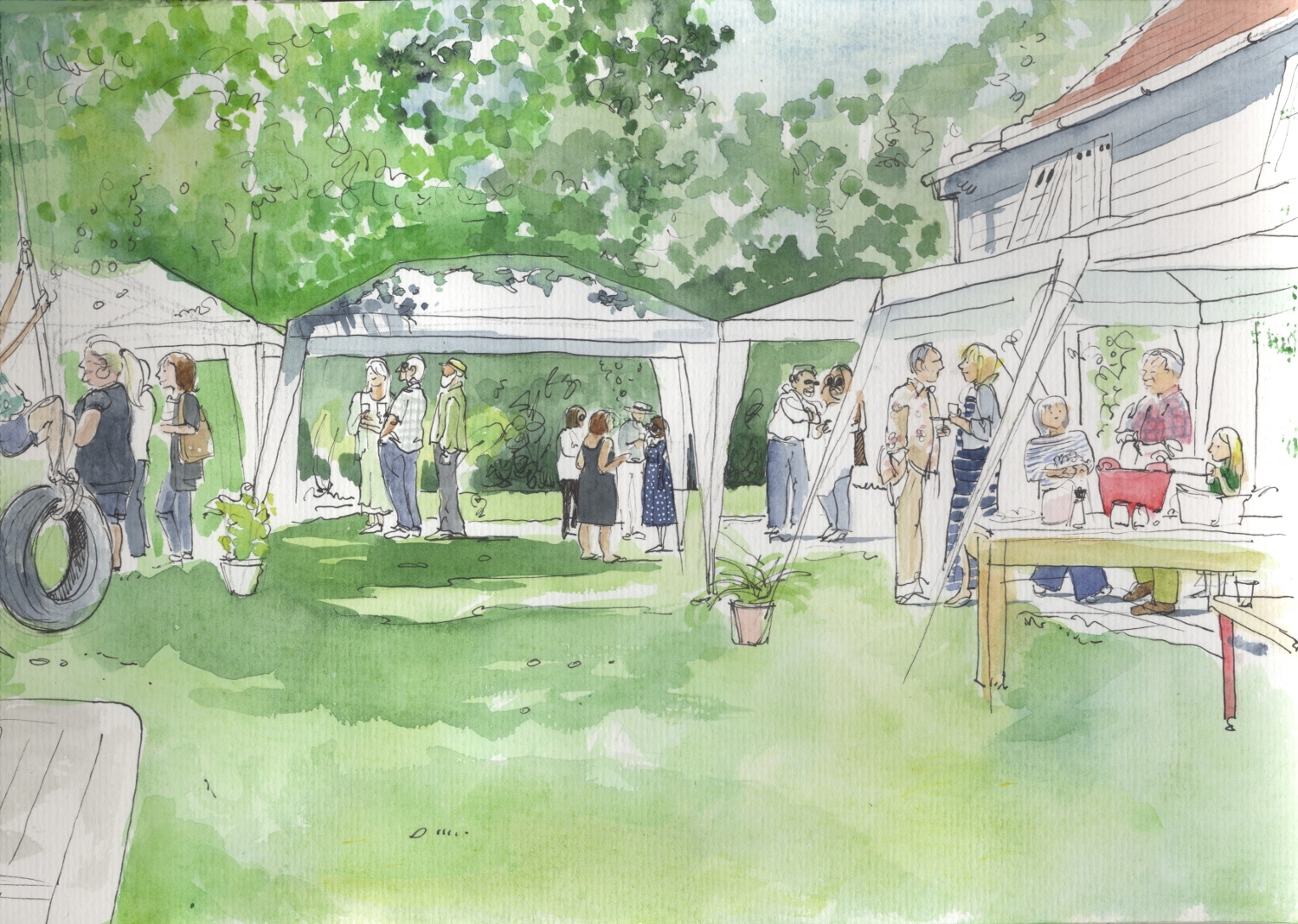 It's my idea of a classical English garden party: lots of fruit punch made with Pimm's, meringues with strawberries and cream, a fine side of beef barbequeued to perfection were served to about a hundred guests; leaves cast dappled shadows on white awnings and the sun got hotter, so children ran in and out of the spray from a hose. You can see a sweet little boy wrapped in a giant orange towel sitting on a bench after he'd had enough. I drew the figures on the right before the crowds arrived to block my view, so it looks a bit quieter than it was. As usual there were hordes of little girls watching me as I drew. One of them, my 9-year-old niece, remained silent, and surprised me with some very accomplished paintings of her own a few days later, done from life with the tiny sketch kit I had just given her for her birthday. It's so exciting when you come across a brand new sketcher, and she has the support of her mum, who is also keen to learn the secrets of sketching.

The afternoon shadows grew longer, and although the World Cup Final was due to begin at 8pm, the party showed no sign of slowing down. In the end my son and a few others turned on the match. I don't have any interest in football but - like lots of other sketchers - I've discovered that football matches provide an ideal opportunity to draw men keeping still. I did make a half-hearted attempt at watching the match, but my boy kept forgetting to keep his head to one side so that I could see (we were a bit tight for space) so I gave up and drew him instead. He looks about 17 in this but he's only a young fella of 12 - I got something badly wrong. That's his dad on the right. You'd swear my family was interested in football - but we're not, unless it's the World Cup. 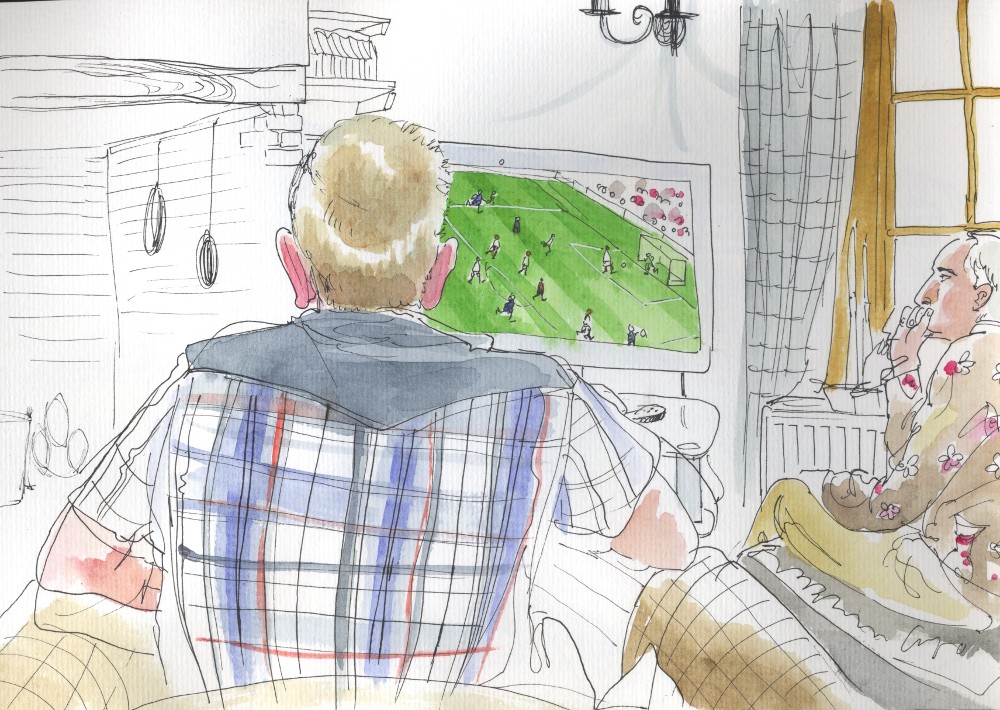 There aren't many other sketches to record my visit to Kent. I had decided to leave the paints aside unless I could do it without notice, as the family does get a bit annoyed when I disappear into the sketchbook. So there are no sketches of Leeds Castle, which we visited the day after the party, and which was spectacular, and none of picturesque Tenterden or its little nineteenth-century steam train that trundles up and down ten miles of track every day. I'm sure to get a another chance some time.

But I did insist on whipping out the sketchbook on the flight home. I figured it would take my mind off the flight, and the mechanics of flying, which always make me tremendously nervous. My husband and son love all aspects of flying, and my eldest is nonchalant, but the youngest shouts things like, "Wow, it's so far down!"
I find that sketching works a lot better than reading when it comes to distracting me.

Any of you determined sketchers will know that a 100ml bottle of water is perfectly acceptable on a flight, as are paints and pens. So even as we were parked on the runway at Gatwick, I had my sketch kit out and was scribbling away.

As I started to paint, my husband was bemused. "Why are you doing the same painting as last time?" he said. "It's boring." "It's about the process, not the result," I said. Then a stunning white-blonde air steward started her safety routine. I realised far too late that she'd make a great subject, and I had just drawn her lifejacket when she packed up. You can still see the blow-up tube on the right of her chest, which I changed into the blue jacket of her dark-haired colleague.  I had to morph her into another girl, because Melissa (as the blonde girl turned out to be called)  had disappeared into the back of the plane. She was disappointed when I told her that she was nearly in my sketch, and said that she would have drawn out her safety procedure if she had known, which is a very Irish response. 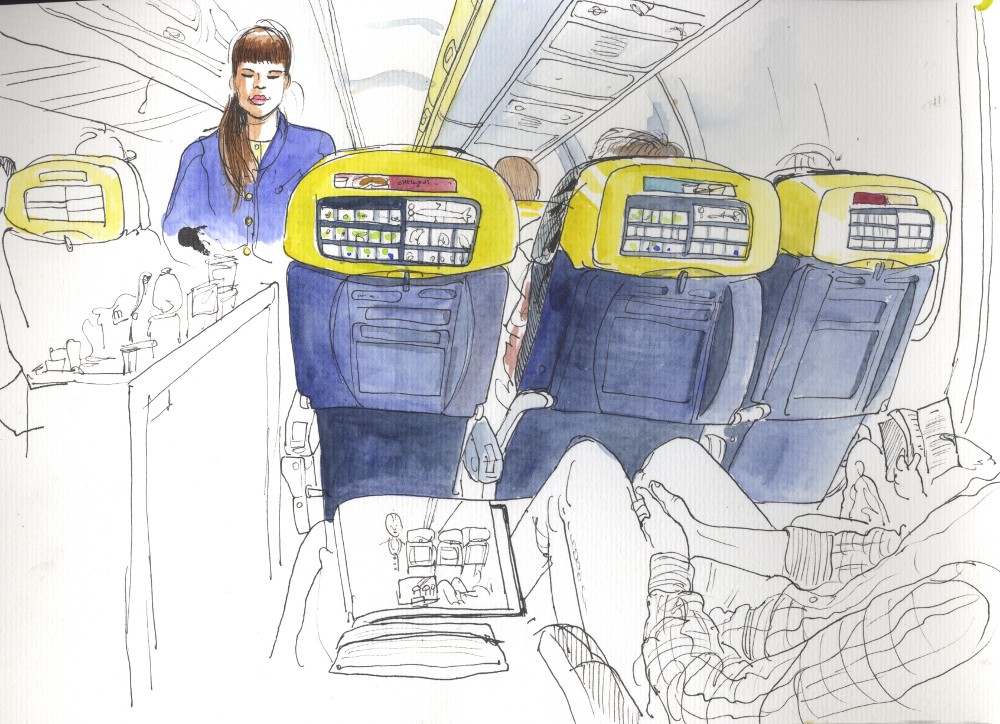