A week in Provence...but I long for a year

A week in Provence...I long for more

By Róisín Curé in Nice, France

Imagine this: you're in  a sketcher's paradise, surrounded by strong shapes and clear, intense colours. Every person who passes cries out to be captured in your sketchbook. The weather is sunny, without being scorching - perfect for a sketching session, long or short. You have all your kit with you. You're a kid in a candy shop...but you cannot indulge.

That was my sketching experience last week in Nice, on the Cote d'Azur. A classic first-world problem: I was with my family on a much-needed break, and so I experienced the conflict of wanting to draw everything I saw, while at the same time wanting to kick back with the family all the time, too. So I did what I could: I hoped there would be "cracks" in the day when I'd get a chance to sneak a sketch in, and so it turned out.

My husband and I stayed in a charming apartment tucked into the eaves of a building on Rue Dijon, near the market at Libération. I tried sitting on one of the sloping beams to draw the view from the window but that was too uncomfortable, so I balanced everything precariously on the windowsill of the other room and stood on a footstool...the early morning sunshine was too glorious to miss. I did this sketch over two mornings when the city, and my better half, were still asleep. 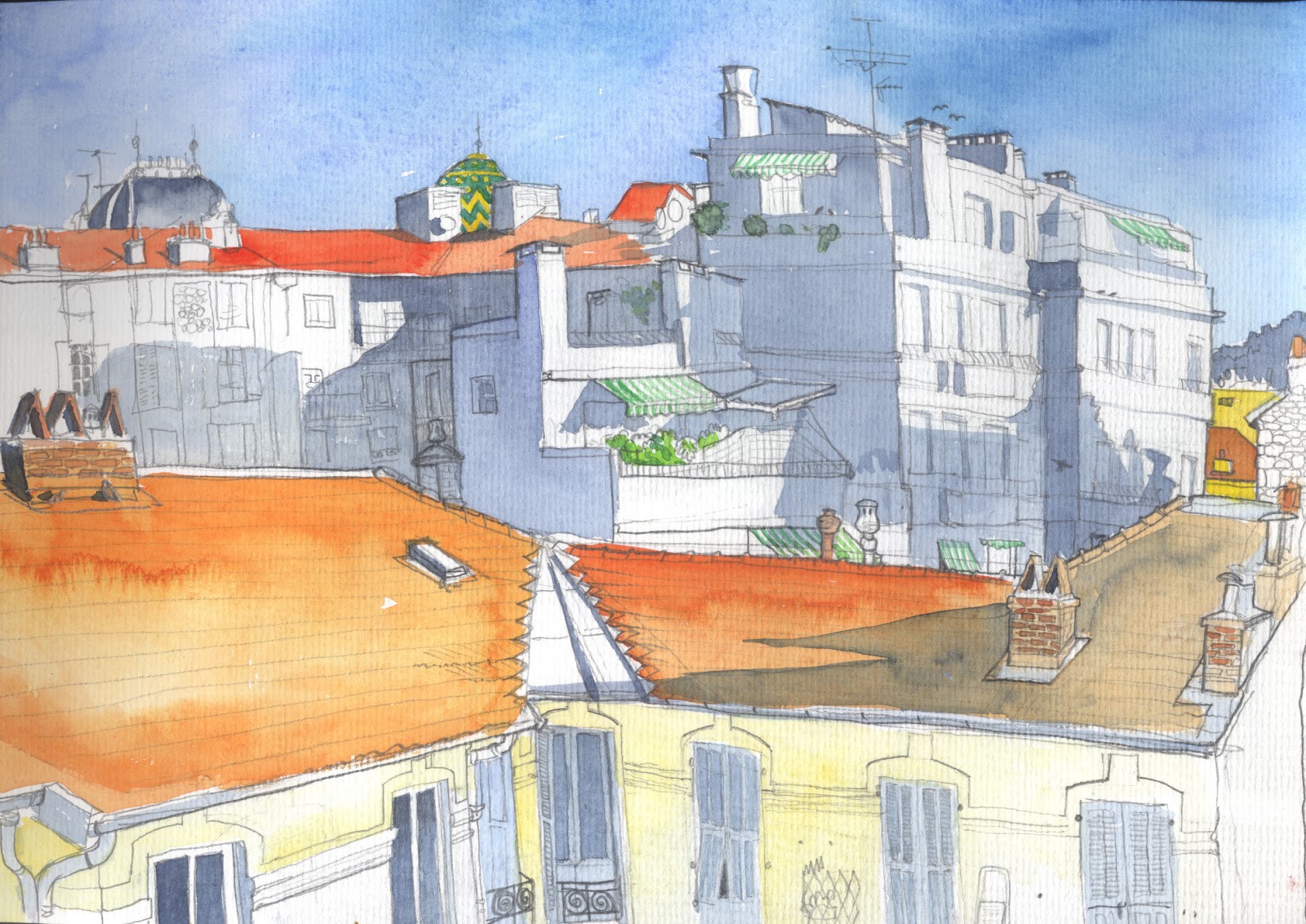 I was nervous about the orange of the roof nearest me, but I remembered Felix Scheinberger's wonderfully abandoned use of colour, and threw caution to the wind - the place it belongs, when you're sketching, in my opinion. So I just mixed the brightest orange I could come up with on my slovenly-kept palette and lashed it down.

Over the week, I made more false starts and abandoned more half-begun sketches than I have ever done, and my specially-reserved France sketchbook is (for the most part) a crashing disappointment.

One morning a flare-up in a minor knee problem provided the perfect excuse to stay at home for an extra hour...but instead of going back to the apartment I stopped by the fish market at Libération on the way back, and cast about for something that would inspire a sketch. Then I saw these -

and I knew I had found my subject. Luckily, there was a café just opposite it, and I sat down with a coffee. It was bliss: as soon as I sat down and started to draw, I felt that familiar blanket begin to envelope me, when the locals start to edge closer and engage; I'm like a cameraman in a wildlife documentary, when the meerkats start to get curious. The beautiful thing about being fluent in the local tongue as a sketcher is that the experience becomes infinitely richer. I began with those beautiful fish heads on the left. The younger fishmonger saw me drawing them and apologised when a customer bought one, but said he'd only take them from the back. I drew the older fishmonger, a quiet man, and when I finished the younger fellow said "Now for the young man!" and took up a Charles Atlas-type pose, all biceps and profiles.
"I'm sorry," I told him, "but I won't draw you like that."
He obliged and went back to serving customers. After a bit he came for a look.
"Em..." I said, "would you mind..."
"Go back to work, is what you're saying," he said. Luckily a lady customer came along and I caught him just as he held out the paper to take her order.
The owner of the bar where I was sitting came over to me.
"That's all very well," she said, "but you haven't drawn Lolotte." She bent down to kiss a black labrador-sheepdog cross with a gentle expression.
"She hasn't drawn you, has she, my darling, but she'll draw you now, won't she? Such a beautiful little Lolo, my beautiful Lolotte," she told the dog, amid many kisses on the dog's muzzle.
The fishmongers tried to get Lolotte to sit for me. But the pavement was wet, having been sluiced down by the fishmongers, and poor Lolotte sat there under duress so I did her as quickly as possible. 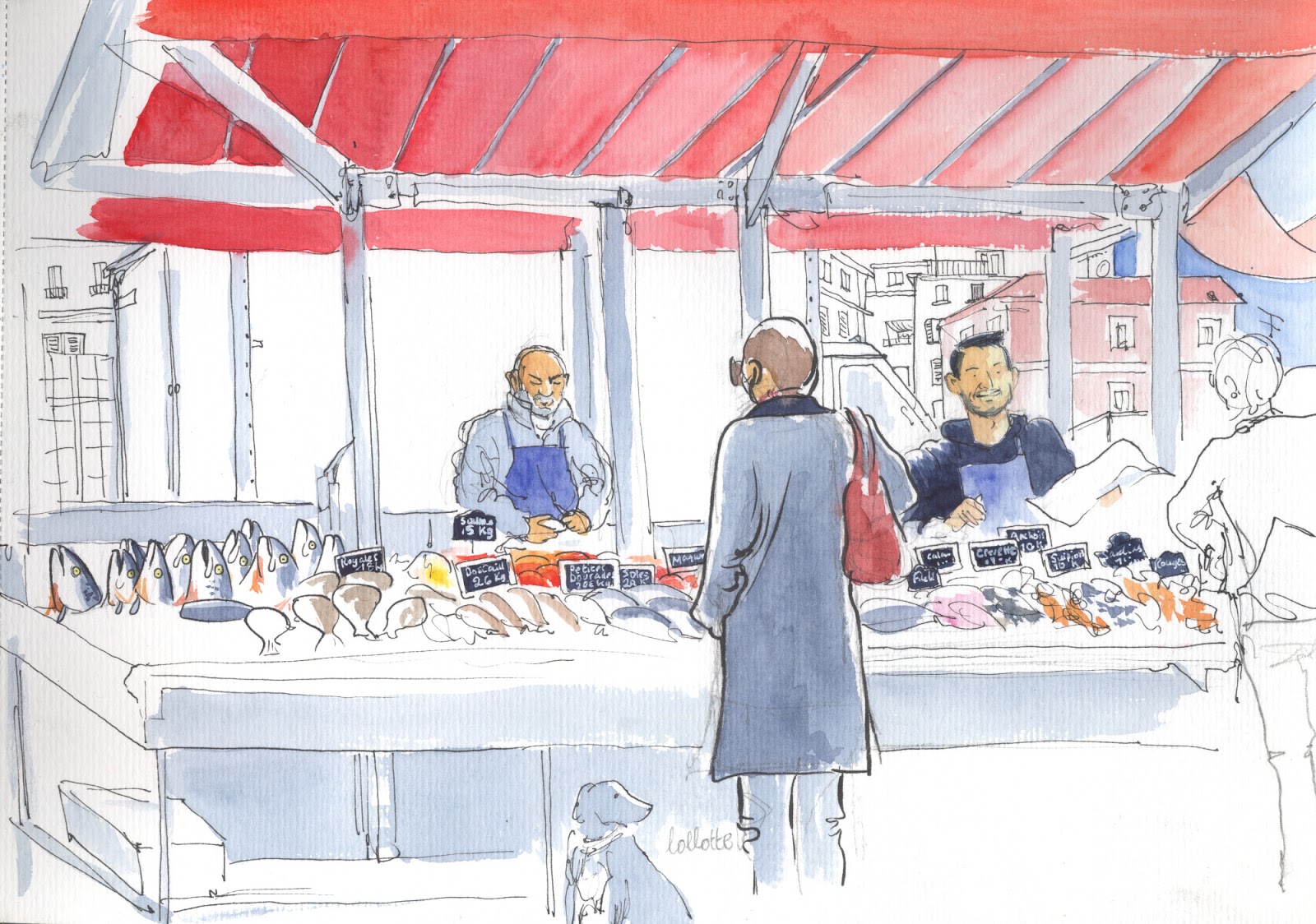 I apologised for not doing Lolotte justice but the café owner was very happy.
"That's her, alright," she said. "That's my beautiful Lolotte."

One day, everyone hopped on a train - kids, grandparents, the whole shebang - and tootled off down the coast to Italy. We were enchanted by the locals in the little town where we got off; a tall, large-bellied policeman, resplendent in navy uniform, dashing white cap and mirrored sunglasses, gave us directions in a thoroughly laid-back "nothing's a problem" manner, finished with that adorable "Prego," that sounds so calm. My parents had eaten in a place they loved a couple of years before, and insisted on traipsing for miles along the promenade - almost deserted in late October - to find it. Tempers were getting frayed, it was really late and I was pretty sure everything was going to be a disaster. Then we found it. I think it was called Chica Loca, and it's in Bordighera. Go there. It's heaven. The husband sat with his arm out of the window, with a sun beating down on us that would have been unbearable a month earlier, but was divine in late autumn. Waves crashed against the pebble beach just a few feet below us. I ate the most incredible homemade fusilli: afterwards I tried to say to the waiter in my extremely rudimentary Italian that I would try to make it myself when I got home, but I must have asked him for the recipe, as he said he couldn't give it to me because the chefs would slit his throat (which he illustrated with a gesture). This of course enhanced my experience of Italians, and of Italy. Afterwards the kids went for a swim and I sketched...

...the sun began to go down and I watched our waiter sweep up after us. That's him at the window where we were sitting. 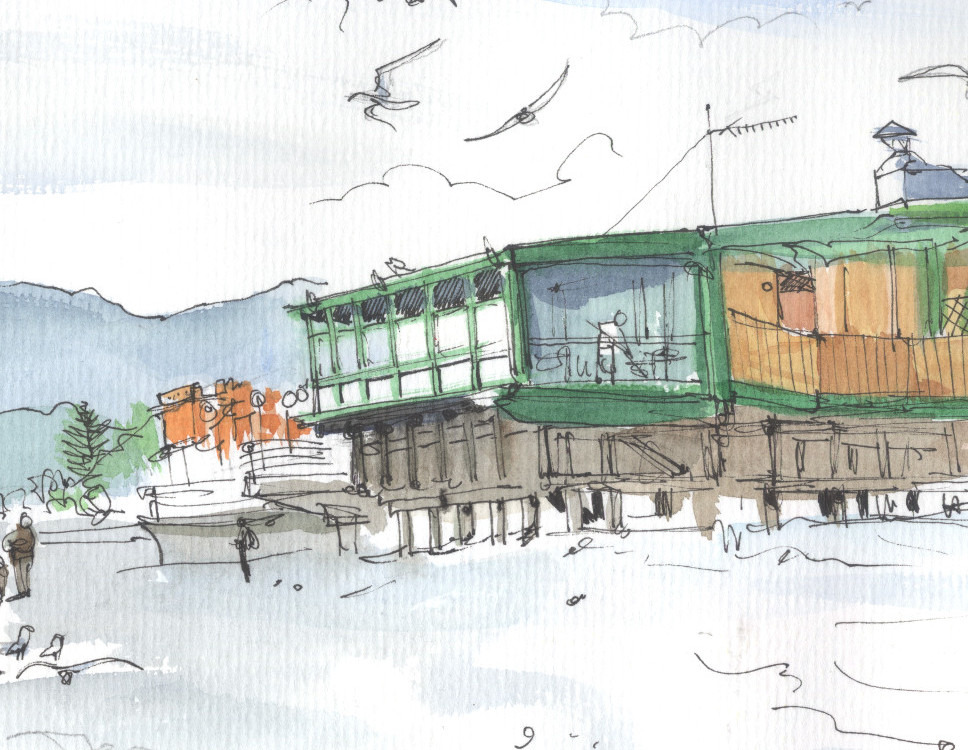 Back in Nice, my husband and I had our morning coffee and croissants next to the market at Libération. The entire street is lined with vegetable sellers, all selling something more or less unique to them - that way they weren't really competing with each other, I guess. My favourite vegetables were the tiny pumpkins called Jack be Little (as in Jack be Quick, Jack jump over the Candlestick...!) and the fantastic slices of giant organic pumpkin that I bought; we loved the light greenish-yellow piles of curly lettuce leaves, nicely plucked from the stalks, so that you could buy as little or as much as you liked; the giant butternut squash, standing in rows, like a vegetable mugshot. We bought strawberries grown nearby, the vendor terribly excited that the unseasonably sunny weather meant they were still ripening in the fields. I took the opportunity to make a sketch one morning. 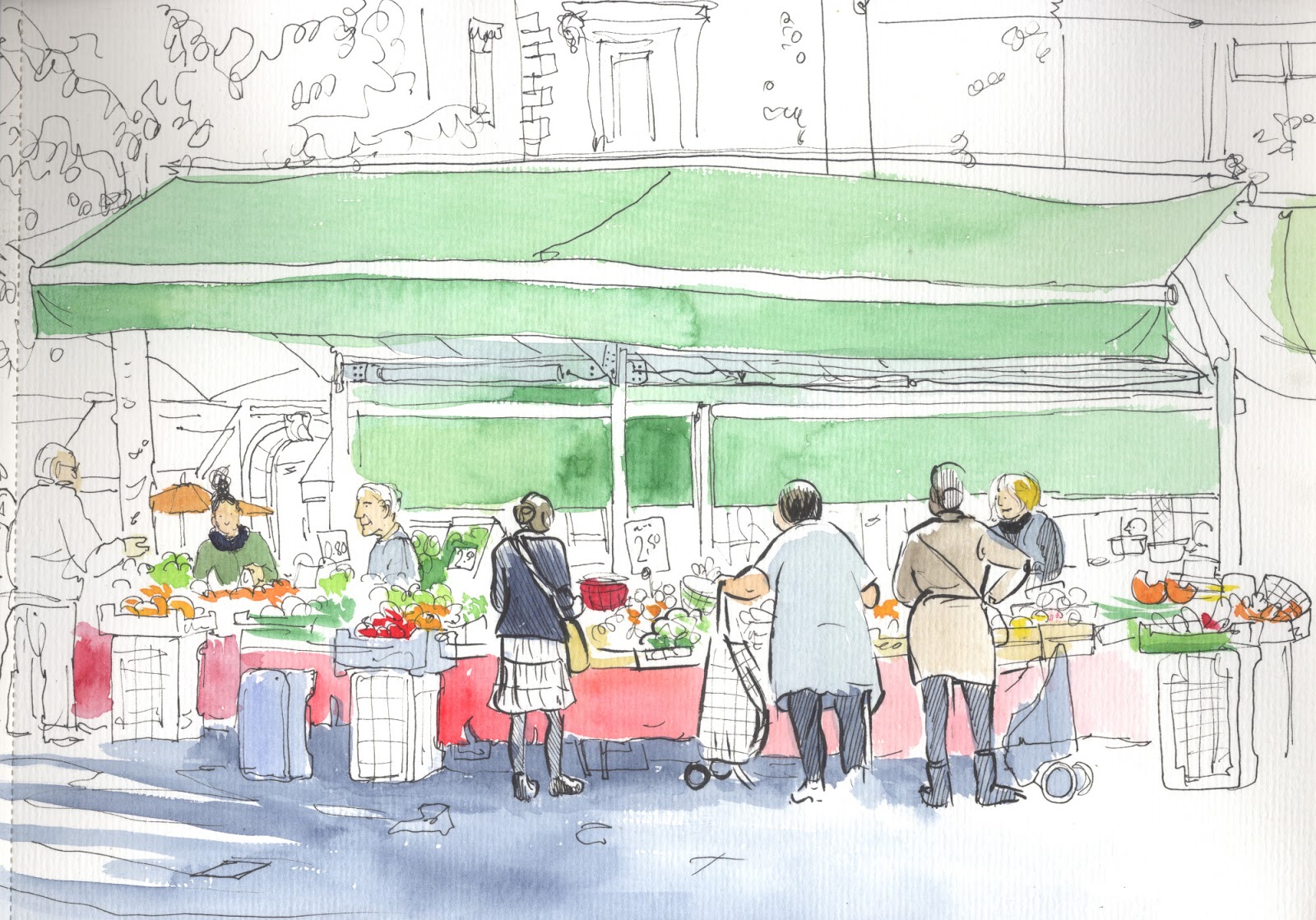 There remained one or two things that I really wanted to draw. The facade of my parents' place in the Russian Quarter is a truly impressive feat of Art Déco architecture. I love that all the buildings are signed by the architects. But I encountered a problem - this time I couldn't blame it on lack of time, or family commitments, or the cold...the problem was me. I found I simply wasn't up to the task of drawing all those details.
"I'm sketching in a genuinely urban environment for the first time in ages," I said to the husband, "and I fail miserably." I was deeply disappointed in my sketching skills when it came to the crunch: I obviously need to draw many more fabulous Art Déco buildings to get a better handle on them. 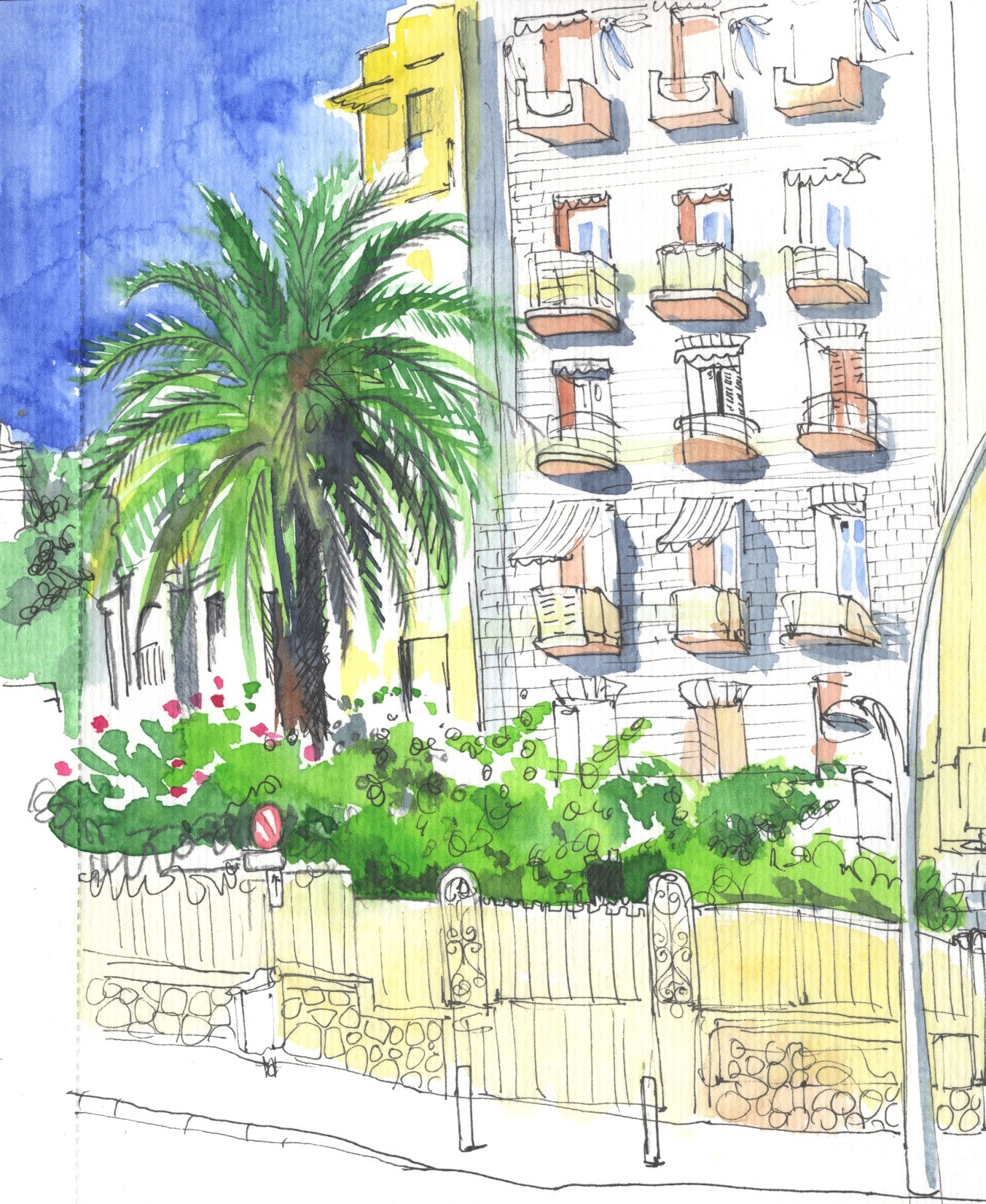 Ah well. I guess I shall just have to return. There are many more "tableaux" out there with my name on them.