by Róisín Curé in Galway 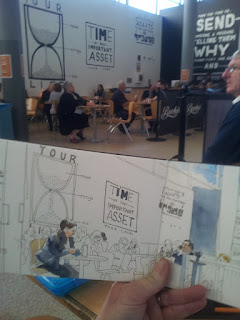 I am in the unfortunate position of visiting our local hospital frequently. I'm not ill, but I accompany someone who is. The waits are long and so I occasionally sketch.

Other than in hospital, I haven't had many chances to sketch of late because I have to use my time productively (you don't get paid to sketch) but luckily there are always gaps in the day when you get the chance. When I sat down to sketch this one of the café in University College Hospital, Galway, I felt a frisson of excitement knowing I had an uninterrupted hour ahead of me. It says a lot about the intensity of my life over the last two months that I had a wonderful feeling of freedom at the prospect of a single hour when no one would need me and I couldn't do any work.

Some farsighted person in the Galway University Hospitals Arts Trust has allowed a very talented young man called Finbar 247 to be let loose with buckets of black and white paint in the main foyer of the hospital. When you have real talent, that's all you need. He has made beautiful graffiti-type art on the walls, with slogans and messages about looking after yourself and making the most of your time. I normally ignore people trying to remedy my laziness but somehow when I read Finbar's words I want to get fitter and stay healthy. I loved sketching his work but I haven't done it any kind of justice. You should check out his website of the same name.

A mix of medical staff, patients and visitors file past at speed. The ground floor of the hospital resembles a very busy train station with a disproportionate number of people in pyjamas or aqua-green uniforms. The ill people move very slowly and the medical staff stride along. Unbuttoned white coats billow past, their wearers like low-key superheroes, which of course a lot of them are.

Two men came to sit at my table. They were chatting in Irish, which I understand for the most part as not only was it drummed into me since I was 4 but my kids attend a Gaelscoil and I get to speak it quite a bit (very badly, usually ending somewhat pathetically in English, having failed to get my point across well enough). Like many well-educated Irish people I speak one or two European languages but Irish isn't my strong suit, despite the decades of enforced learning (we had no choice). I love it now, and I was really hoping the men who sat down would strike up conversation. One was too ill to talk much. His younger companion was really sweet to him, trying to persuade him to eat a sandwich and have sugar in his tea. I practiced my Irish sketching-related phrases in my mind but in the end the younger man just spoke to me in English and when I replied in Irish he acted all confused. This happens a lot. I say my piece in perfect Irish - I am Irish, for crying out loud - and there's an awkward silence, followed by English. As an amateur linguist I do get it, but it's a bit annoying nonetheless.

Here's a bit more detail of my sketch. 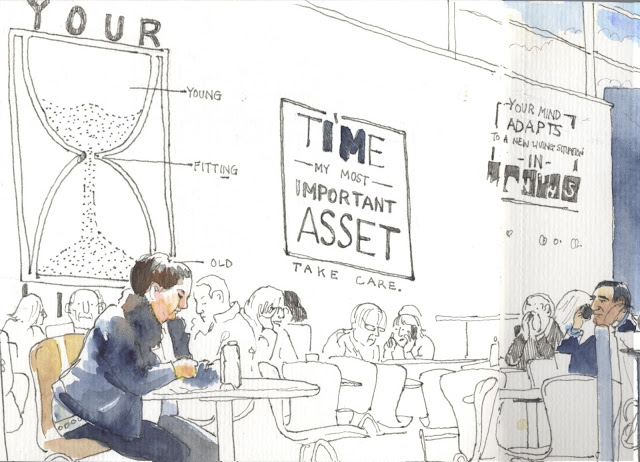 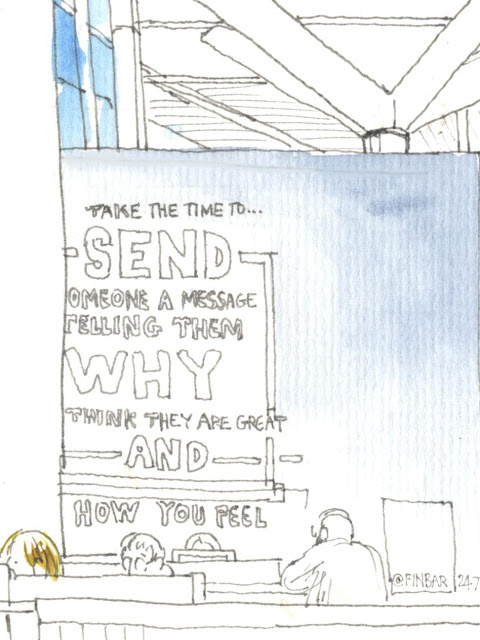 And here's a sketch from before our dreams of Rugby World Cup glory were dashed. This young man was wearing a RWC shirt. I got a silly kick out of using Phthalo green undiluted as I never use it like that - nothing is that colour in nature, except maybe the sea in Mauritius, which I know because I painted it lots of times. 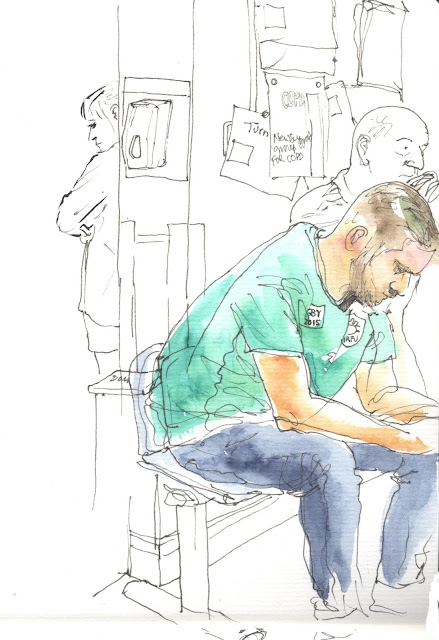 This one is just a line drawing but it got me out of my head for a bit. I'm getting quite used to drawing hand-cleanse dispensers. Their angles are a bit funny so I won't master them for a while yet. 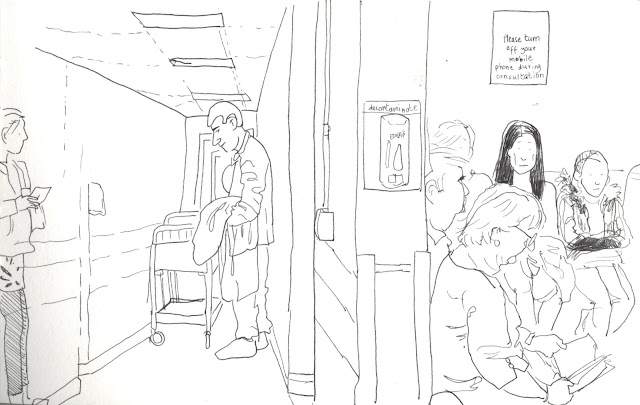 Finally, one from a few months back. This time my charge and I had to watch the entire waiting room empty little by little, leaving us the last to be seen just before the clinic closed for the evening. My young companion became very frustrated, and of course the omnipresent phone doesn't serve to calm nerves. Watching the sketch unfolding did seem to soothe somewhat... 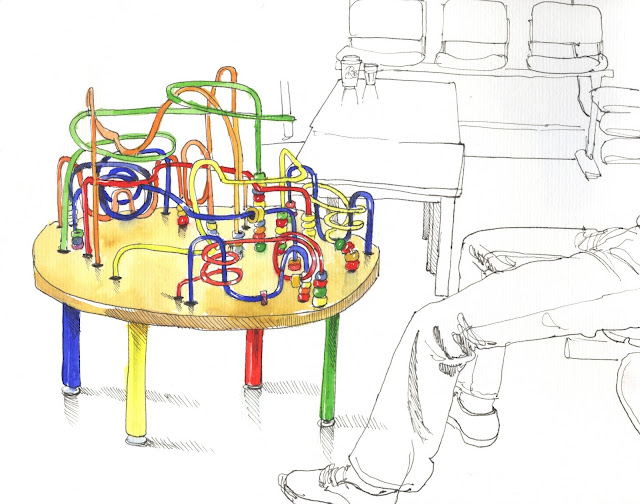 I also did one a few days ago of a lady receiving an iron infusion but she was snoozing away in blissful ignorance of the stupid eejit with the paintbox manically scribbling her likeness as she slept. I will allow her her privacy and not post the sketch.

So there you go. Our health system could do with improvement on many fronts and you can get very stressed in our hospitals, what with the waiting, the worry and all.

Hospital + sketching = calmer me.
Posted by Róisín Curé at 06:05